This story is too good not to share. In Norway, two terriers ran off and disappeared. After four days, one of them returned, exhausted and with bloodied paws. Rescuers were able to follow the bloody paw prints back to the area where the dog had been, hoping to find the other one too. The tracks seemed to come from a badger hole, and they did hear a faint sound coming from it. One of the rescuers put his arm in, got hold of some fur, and started pulling the dog out. But the animal hissed angrily and did not want to be rescued. Also, it wasn't a dog, but Mr Badger himself.

The rescuers somehow managed to keep the badger contained behind some firewood. They dug into the hole and finally found a muzzle - of a dog, this time - and got her out. The dogs, Vesla and Dooly, slept for two days and promised never to do such a thing ever again. Well, not until next time they catch a sweet scent, I suppose.

Anyway, if you're ever stuck in a badger- or a foxhole, look out for dogs. They Those terriers seem to find their way in and not out quite often. Fortunately for me, there are no bears around here, which is the only hole I think Sam would fit into. Although he has tried to crawl into a rabbit hole... 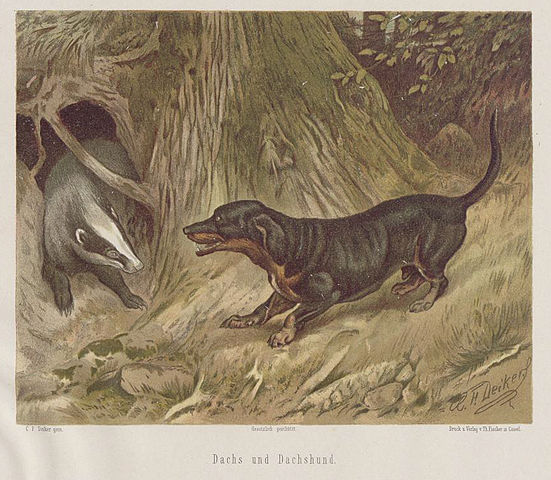 As usual, I probably shouldn't bring misfortune upon myself by saying this, but I think Sam has become a rather good off-leash dog. I can take him places I wouldn't earlier -- the walk by the river, for instance, knowing that he won't disappear into it, or onto the bike path. He actually does come when I call. He may scare some ducks, but he doesn't chase them -- and so far, he hasn't been chased by a swan, either.

Of course, I'm not trusting my own voice entirely. When I panic, so does the voice. So I always bring my little whistle with me, and Sam faithfully responds to both. 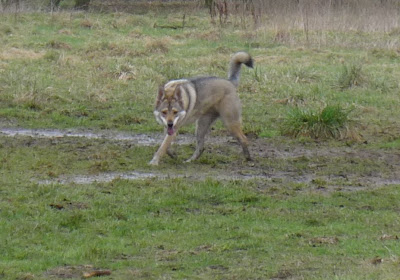 (well, that, and the lure of treats)
No comments:

Christmas brought a tiny blinking light for Sam. A useful gadget, I thought, for keeping track of him in the dark. With his white, light tan, grey and black coat, he has a habit of merging with the landscape, especially when he's running in the darkness amongst yellowed grass, black trees, white snow and grey mud.

So on the first walk of the new year, I turned on the blink, attached it to his collar, and let him go on a test run. The light lasted for about 30 seconds. Then half of it got bounced off by Sam's enthusiastic running, and was lost somewhere in the undergrowth and darkness. It was a cheap gadget, but I don't think I'd be able to afford it at such a replacement rate.

Today, I went back to my old tricks instead: Sam has a red harness with reflective trim. Amazingly, although in a way it's darker than him, it made it easier to see him running in the dark. Perhaps it broke his camouflage, although it did make him look a little bit like a zebra.

The harness and the jangling of his collar and tag lasted the whole walk. I would have been better off using that blinking light as an ornament on my Christmas tree.
No comments: 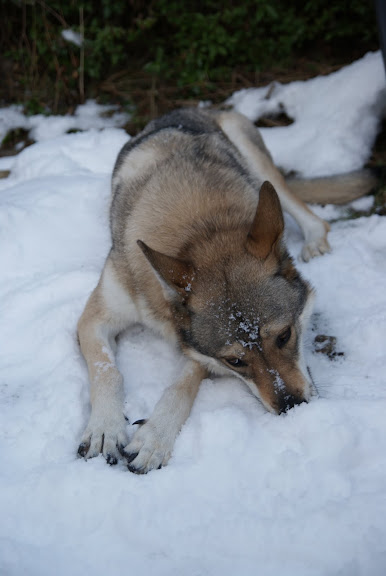 Sam's itchings cleared in less than a week. yay! the pill and gel combo probably helped, as well as avoiding any more shampooings. i cut a little more of his thick fluffy fur though, and i'm glad i didn't have to do more. shaved furmonster just isn't right!

i had to skip the vet followup appointment on account of my own health, and since Sam was clearly on the mend, didn't bother to reschedule. i hope the vet can live with the hanging plotline...
No comments:

Sam has been spectacularly good lately, so providing no amusing anecdotes for my blog. another plausible explanation is that we've gotten so used to his antics we hardly remark upon them anymore.

well, this week marks the end of that. something is being naughty, but we can't really blame Sam. he has a skin problem. i took him to the vet because i thought he'd injured himself on barbed wire, or something like that. when he shaved off some of Sam's thick, fluffy fur, we realised he had little sores all over his shoulder (after i'd taken him home, i found more all over his back). he suggested flea allergy, but the husband and i are discussing alternative possibilities: the ripe cow muck he rolled in last week? the sweet-smelling shampoo the dog walker used to get it off him? (that didn't quite work, quite the way. we got perfume mixed with barn smell instead).

currently, i'm feeding Sam delicious meals mixed with foul-tasting pills -- i know they must be bad because Sam, who gobbles up his deworming tablets, carefully licks bits of these pills clean. and putting special vet-prescribed cream on his poor, spotted skin. our poor, mangy-looking dog is getting a royal treatment, and quite enjoying it.
No comments: 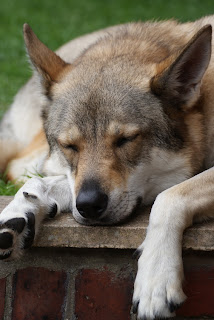 that's what holidays are for, aren't they? Sam found a perfect spot. in the holiday home, the garden was built in two levels. the lawn was on the upper level, which meant Sam could lie down comfortably and still survey everything. he never let down his guard! not once! well, maybe once.
1 comment: 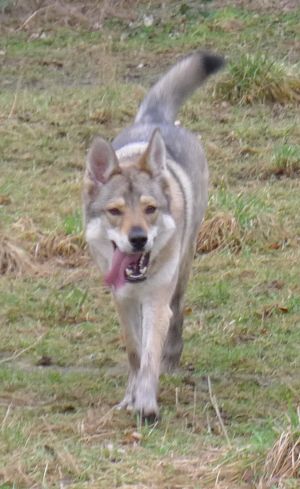